You are here: Home / Superyacht News

Azzam left recently the Lürssen facilities in Bremen for her maiden voyage.Seeing her at last in voyage it’s for us at Nauta Design a proud and very emotional moment.As all the others of the team involved in the design and construction, we have been waiting for this day for almost one year, since her delivery on October 22nd 2013. 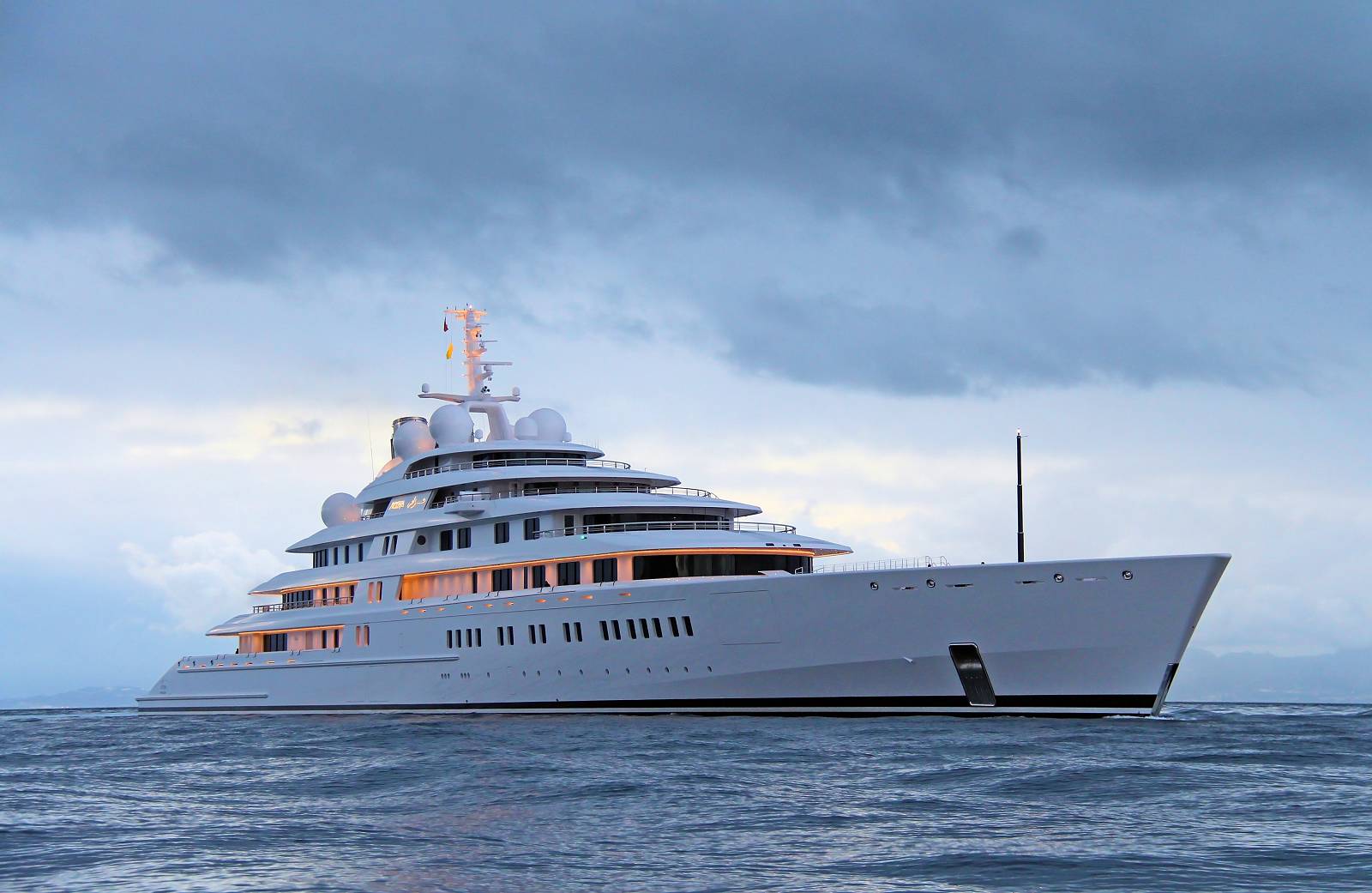 We all made a huge effort to comply with an incredibly short, thus very challenging, design and production schedule which Lurssen actually succeeded in achieving even one month head of time. Knowing now that the Owner is finally starting to enjoy what we have created is definitely a happy moment.

Azzam design and build process was like a Ph. D. course in the megayacht world !  We are now ready and confident in facing any kind of challenge in that field in a very mature way: the wake of Azzam, in terms of new projects, is already there and we are enjoying our confidence in dealing with it. 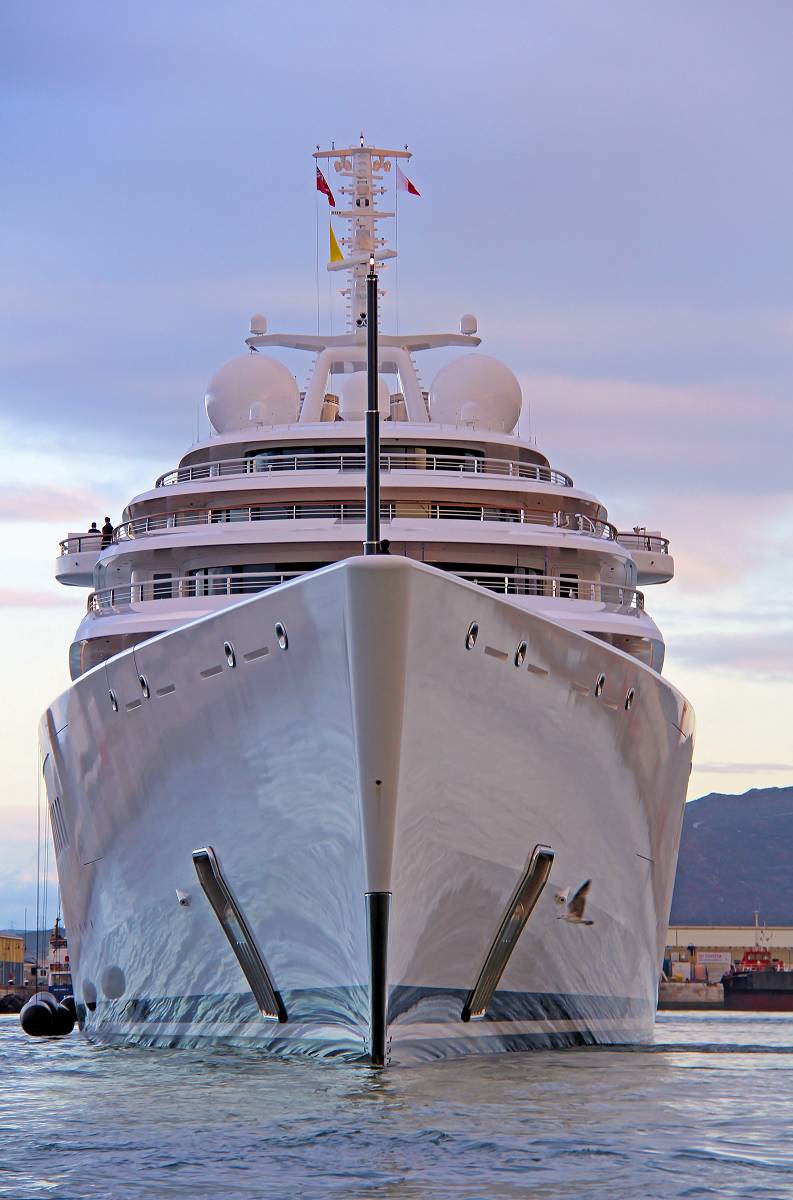 Ancona, 4th June 2014 –  M/Y Saramour 61 m left the dock of CRN’s shipyard yesterday, 3rd June, at  5pm. The yacht was delivered on May 26th. She will cruise the Med during the forthcoming summer. 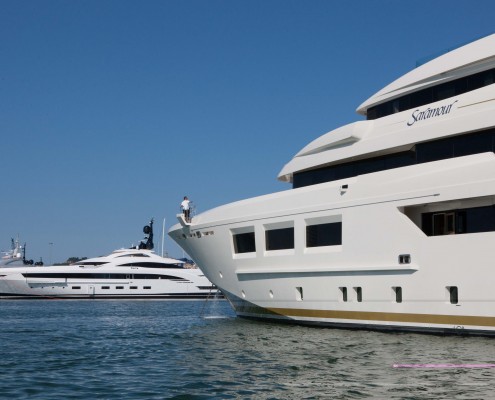 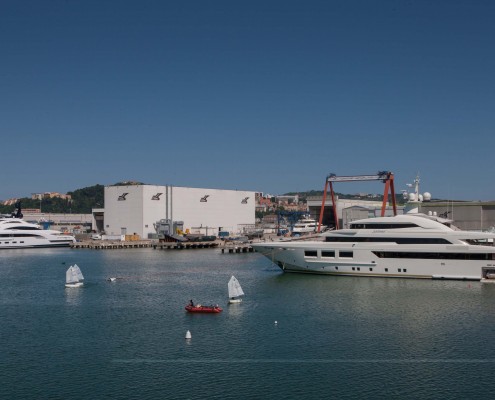 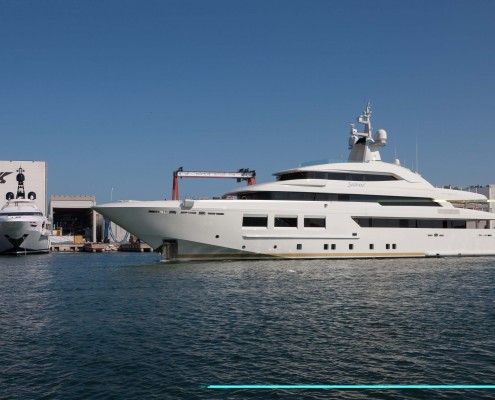 Ancona, 31st May 2014 – More than 1,000 people – including Local Institutions, illustrious guests, employees and their families, the Ferretti Group and CRN Management as well as the citizens of Ancona – participated in the enthralling launch ceremony of the new 73m CRN 132 – M/Y YALLA, which was held late morning at the CRN shipyard of Ancona.

CRN is a shipyard and brand of the Ferretti Group, which for over 50 years has been constructing fully-customized megayachts in steel and alluminium of up to 90 metres. 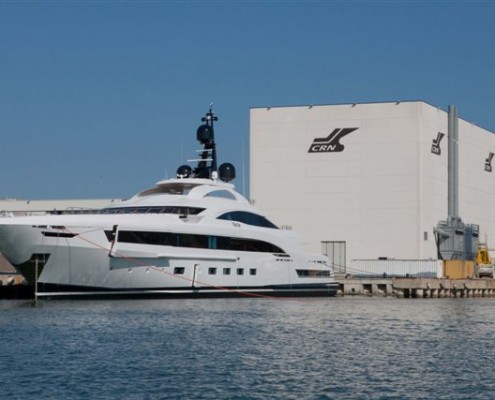 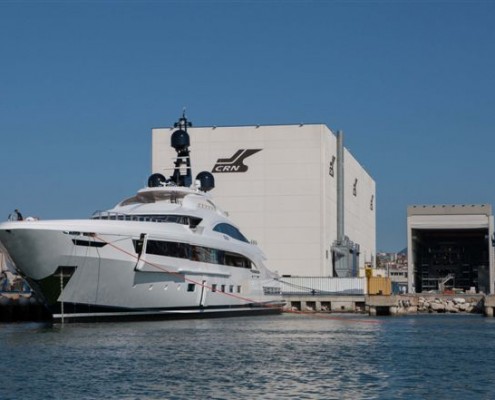 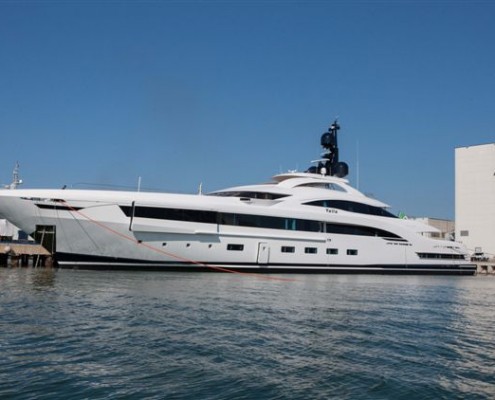 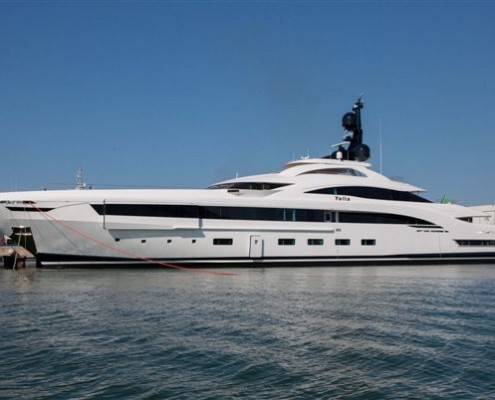 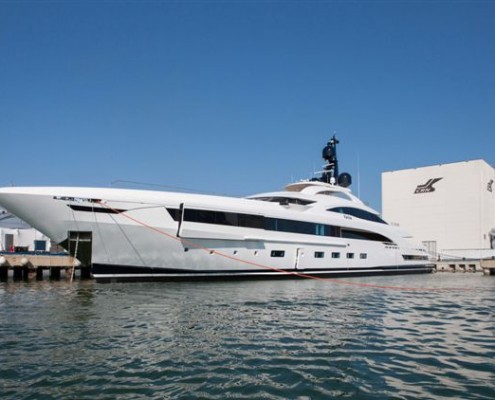 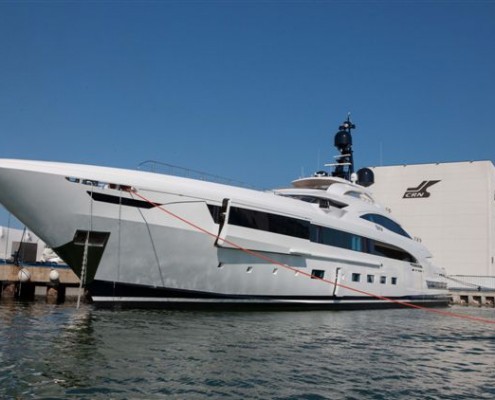 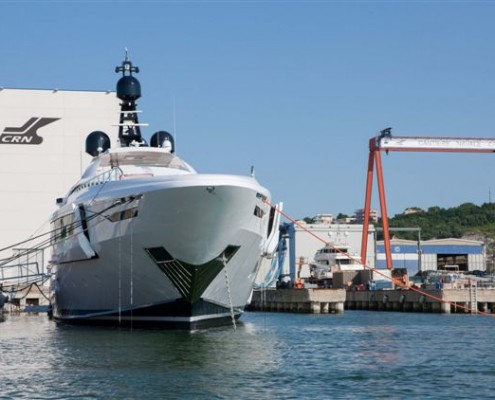 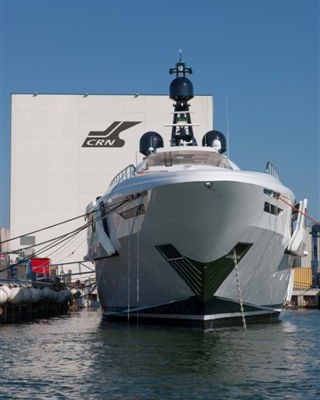 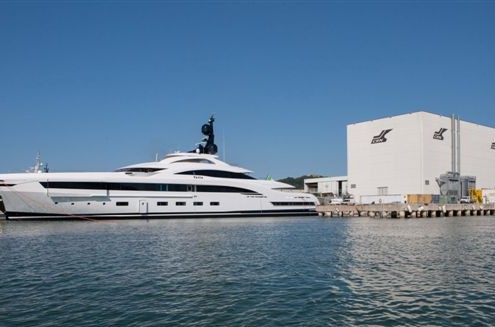 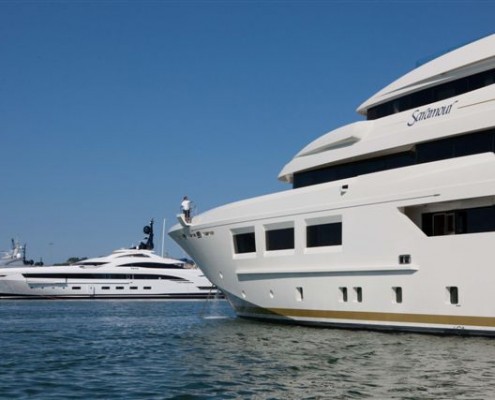 The new megayacht, the first to be built by CRN on the new naval platform of 12.50 metres in width, is characterized by sleek, slender and sporty lines, which make the profile particularly streamlined. With 5 decks, M/Y CRN 132 73 m can host up to 12 guests in its six cabins, including the Owner Suite and Vip cabins, together with a crew of 22 members.

The construction of this new jewel of the sea, which includes the best design solutions realized by CRN, has required around 430,000 hours of work from the shipyard workers and subcontractors and the daily contribution of over 150 direct and indirect workers.

The launch ceremony was introduced with the greetings and speeches of the top managers and the local authorities: Alberto Galassi, new CEO of the Ferretti Group, Lamberto Tacoli, Chairman and CEO of CRN, Xinyu Xu, Vice-chairman of Weichai Group, together with the Mayor of Ancona Valeria Mancinelli.

Lamberto Tacoli, Chairman and CEO of CRN, says: “Following the launch of  M/Y CRN 133 61 m, a few months ago, we are proud to celebrate the launch of the new M/Y YALLA of 73 m, which represents a challenge and an objective for the whole CRN shipyard. YALLA will mark another important result for the development of CRN in the world. A sincere thanks for the trust of the Owner and for the work of all employees and subcontractors who have worked on the project, to the architects Franck Laupman of Omega Architects and to Droulers Architecture. I also thank our shareholder Weichai Group and the new CEO of the Group Alberto Galassi for their participation in this important event for CRN and for the whole Ferretti Group”.

A new recognition in Amsterdam for the flagship of the Ancona shipyard.

5th May 2014 – CRN, part of the Ferretti Group and specialising in the construction of fully-customized megayachts, made of steel and aluminium, from 40 to 90 metres, with its flagship, M/Y Chopi Chopi 80 mt,has been honored with the prestigious award “Judges Commendation” dedicated to the largest displacement motoryacht of 2,000 GT and above at “The World Superyachts Awards”, organized by the editorial group Boat International Media. 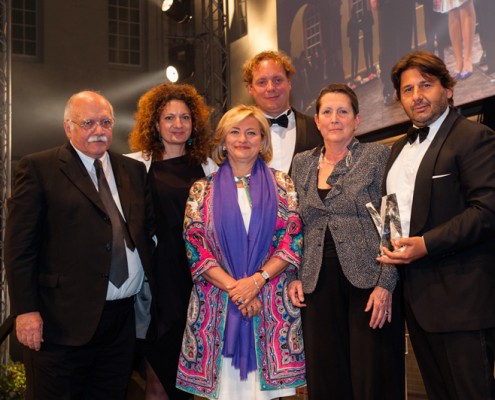 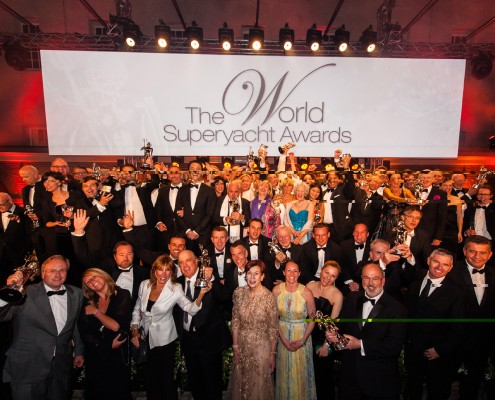 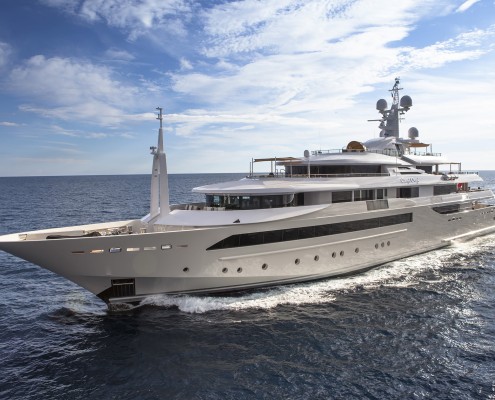 Against the splendid backdrop of the National Maritime Museum in Amsterdam, after a two-day event dedicated to the Superyachts Industry and its Excellence, M/Y Chopi Chopi was awarded a prize. The award was received by Lamberto Tacoli, Chairman and CEO of CRN together with the Team of CRN and the architectural firms Zuccon International Project, which created the exterior profile and interior layout and Laura Sessa, who was responsible for the stylistic concepts and interior design, in front of an international audience of Owners and representatives of the most prestigious shipyards in the world.

After having won the “Interior Design Award” for megayachts over 60 metres at the “Showboats Design Awards”, M/Y Chopi Chopi  has also won the special prize which the jury of “The World Superyachts Awards” reserves for the megayacht which has stood out from the rest on the world yachting scene in 2013 for characteristics, innovations, design and onboard technology, distinguishing features that allowed this vessel, totally Made in Italy, to captivate the Owner’s family and to win the coveted prize.

Lamberto Tacoli, Chairman and CEO of CRN, comments: “This new, unexpected and prestigious award for Chopi Chopi, our flagship, is the reward for the work undertaken by all the CRN shipyard, in close collaboration with the Owner and the architects Laura Sessa, Giovanni and Paola Zuccon, not forgetting our shareholder Weichai Group and our friend Alain Maaraui of SeaPros; my personal thank you goes to all of them, once again. Chopi Chopi, in addition to perfectly representing the commitment and the passion that have characterized the shipyard of Ancona for 50 years, brings prestige to our Italian Nautical Scene and will be a great stimulus for continuing our fascinating and demanding work”

Hull number 129 built by the shipyard, at a staggering 80 metres, is the largest megayacht ever built by CRN and one of the biggest ever produced in Italy. Chopi Chopi is a grand showcase of Italian quality, having been fully constructed in Ancona and designed by two Italian architectural firms: Studio Zuccon International Project, which created the exterior profile and interior layout together with CRN Engineering, and architect Laura Sessa, who was responsible for the stylistic concepts and interior design. Chopi Chopi is a steel and aluminium displacement hull megayacht with 6 decks that can host up to 12 guests in six suites, 30 crew members and nine staff.

Conceived as a family house, Chopi Chopi represents a synthesis and, at the same time, an evolution with the characteristic features, the soul and the innovations of a vessel branded CRN, which stands out for its spectacular volumes, the airiness of its spaces, its slender structures and its soft lines, the attention given to detail and well-being onboard, the play of lights and, above all, the more direct contact with the sea.

As with every vessel produced by the shipyard, the new flagship fully embodies CRN’s strengths: the balconies and open terraces in the VIP cabins on the main deck, the beach club on the lower deck with the stern hatch that turns into a 100sq metre beach overlooking the water and the wide windows, which allow light to flood into the interiors, thus granting constant eye-contact with the sea. Moreover, the Chopi Chopi megayacht features some particular innovative solutions, such as the avant-garde pilot house – sporting the characteristic round shape – and an exclusive space for the Owner, with a deck entirely devoted to him, located between the upper and sun deck, where he can enjoy cruising in maximum privacy and which can also be reached thanks to a helipad located at the stern.

Following the launch in April, the interiors of the eighth pleasure vessel of the successful Navetta 43 composite line have been completed

CRN is the Ferretti Group’s Shipyard specialising in the construction and marketing of fully-custom and semi-custom megayachts made of steel, aluminium and composite material, ranging from 40 to 90 metres.

The Navetta 43 line represents a milestone in the 50th anniversary of the Shipyard, because it was the second composite line, after the 128 line (six 40 metres yachts built between 2004 and 2011): before that, CRN production was only focused on steel and aluminium yachts.

After its launch, Lady Genyr remained in the Shipyard to allow the completion of its interiors, that were finished according to timetables. The pleasure ship will be deployed in the Mediterranean, where the Owner will cruise during the summer season.

The megayacht Lady Genyr is a displacement Navetta made of composite material, entirely Made in Italy and the suppliers involved were mainly local, as in all other CRN products.

The external shape and the internal layout of the megayacht were designed by the architects of Studio Zuccon International Project, while CRN Naval Engineering has taken care of the naval project and the architects of the CRN Interior design and decor found solutions for the interiors and the furnishing.

The pleasure ship, 43 metres long and 8.6 wide, can comfortably host 10 guests in five cabins (an Owner’s suite + four VIP cabins) and 9 crew members and it can sail in absolute comfort at a top speed of 15.5 knots and a cruising speed of 13 knots, with its 2 Caterpillar C32-C engines. It has a range of about 3,800 miles at 11 knots, therefore, perfectly capable of sailing across the ocean.

With its four decks and bulbous hull, Lady Genyr, when compared to the other megayachts of the Navetta 43 line, has a newlayout of the sun deck, characterized by even wider spaces. Among its special features is the internal lift linking the decks, expressly requested by the Owner.