Following the launch in April, the interiors of the eighth pleasure vessel of the successful Navetta 43 composite line have been completed

CRN is the Ferretti Group’s Shipyard specialising in the construction and marketing of fully-custom and semi-custom megayachts made of steel, aluminium and composite material, ranging from 40 to 90 metres.

The Navetta 43 line represents a milestone in the 50th anniversary of the Shipyard, because it was the second composite line, after the 128 line (six 40 metres yachts built between 2004 and 2011): before that, CRN production was only focused on steel and aluminium yachts.

After its launch, Lady Genyr remained in the Shipyard to allow the completion of its interiors, that were finished according to timetables. The pleasure ship will be deployed in the Mediterranean, where the Owner will cruise during the summer season.

The megayacht Lady Genyr is a displacement Navetta made of composite material, entirely Made in Italy and the suppliers involved were mainly local, as in all other CRN products.

The external shape and the internal layout of the megayacht were designed by the architects of Studio Zuccon International Project, while CRN Naval Engineering has taken care of the naval project and the architects of the CRN Interior design and decor found solutions for the interiors and the furnishing.

The pleasure ship, 43 metres long and 8.6 wide, can comfortably host 10 guests in five cabins (an Owner’s suite + four VIP cabins) and 9 crew members and it can sail in absolute comfort at a top speed of 15.5 knots and a cruising speed of 13 knots, with its 2 Caterpillar C32-C engines. It has a range of about 3,800 miles at 11 knots, therefore, perfectly capable of sailing across the ocean.

With its four decks and bulbous hull, Lady Genyr, when compared to the other megayachts of the Navetta 43 line, has a newlayout of the sun deck, characterized by even wider spaces. Among its special features is the internal lift linking the decks, expressly requested by the Owner. 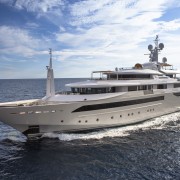 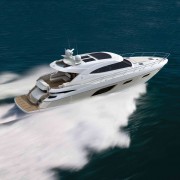 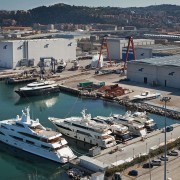 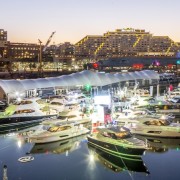 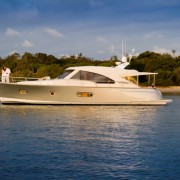 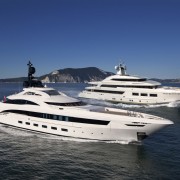 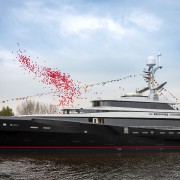