Chat with us, powered by LiveChat
Blog - Latest News
You are here: Home / News / It isn’t over until Fat Boy sings … cruising the magical Whitsunday Isl...

GOLD COAST, QUEENSLAND: The owners of the latest 68 Sports Motor Yacht to be launched by Riviera Australia desired a name that was original, memorable, yet also playful … and they’ve certainly achieved that.

‘Fat Boy’ is what Jacky and his partner Rudi settled on, having been inspired by a quirky brand of homeware in their native Holland.

The crew of Fat Boy celebrate their departure from the Riviera factory on the Gold Coast, as they begin their adventure north to the Whitsundays

Of course, men of somewhat larger girth are also renowned for indulging in many of life’s pleasures, and this lavishly appointed, long-range expedition yacht will be no different as it cruises its home waters of Thailand in grand style.

But first awaits an exciting and adventurous Australian voyage of some 1500 nautical miles over a two-month period cruising from the Gold Coast to the magnificent Whitsundays and then returning south where Fat Boy will be readied for shipping to her home port. There’s a Thai captain on board to familiarise himself with the onboard systems, along with a professional Australian skipper. 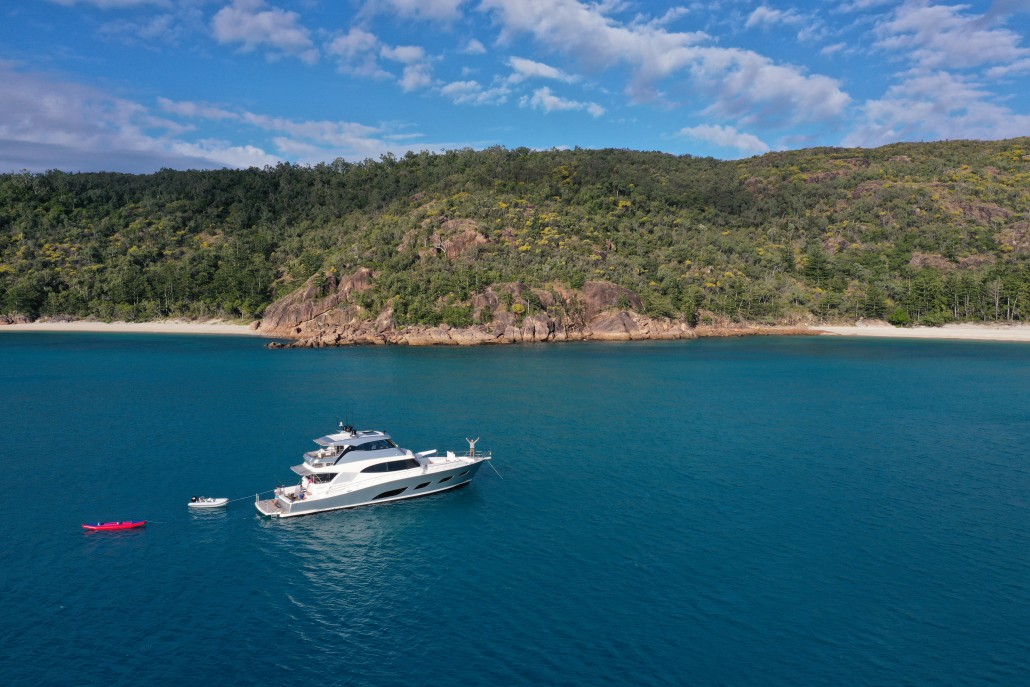 Fat Boy has been built and equipped to be self-sufficient for long durations, so additional tankage has lifted the diesel capacity to 10,000 litres, affording a cruising range of well over 1000 nautical miles. Navigation, communication and safety systems are also very much state-of-the-art.

Jacky admits it’s a remarkable reversal for someone who thought his nautical days were over, once he’d retired.

“I’d owned a Four Winns speedboat and also a share of an old Grand Banks while living and working in Singapore, but once we moved to Phuket I thought that was it,” Jacky says. “A friend then suggested we charter a boat to explore the islands around Phuket.

“After 15 minutes I decided that if I was ever going to own another boat, it had to be in Thailand. The following weekend I walked into the Lee Marine dealership in Phuket and the rest is history.”

Jacky initially settled on a new Riviera 5400 Sport Yacht, which he and Rudi thoroughly enjoyed. Inevitably, though, their horizons expanded, and they began developing a short list of features they wanted in a larger yacht. 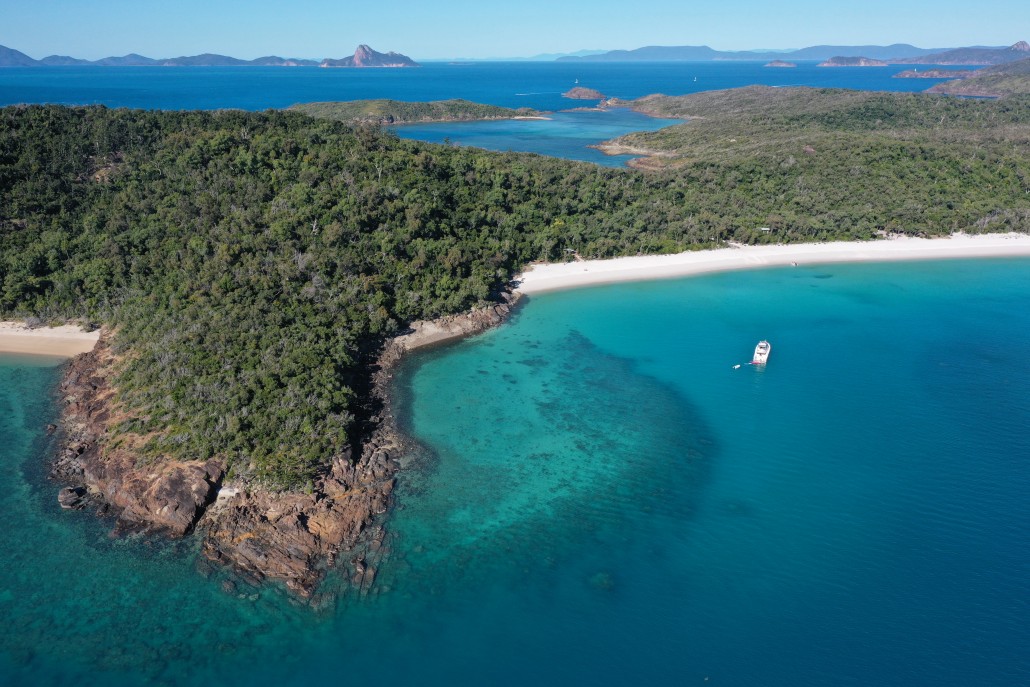 “One of them was a big tender, because in Thailand we’re completely reliant on them,” Jacky explains. “I also realised I was never going to drive the boat myself, so we felt we needed a little more privacy because there would be crew around us.

“We also wanted an extra cabin because it’s always nice to have a little more space than you normally need. The rest was a bonus, as we discovered when we first went out on a 68.”

Already there is talk of more bluewater voyages for Fat Boy later in the year, possibly to Myanmar in Burma then onwards to Turkey asa Mediterranean base. It’s turning into something very special that their friends and family can also enjoy.

“People have said to me, ‘if you’re going to be on the sea, you want to be in a Riviera’,” Jacky concludes. “I’m very, very happy with how everything has turned out.” 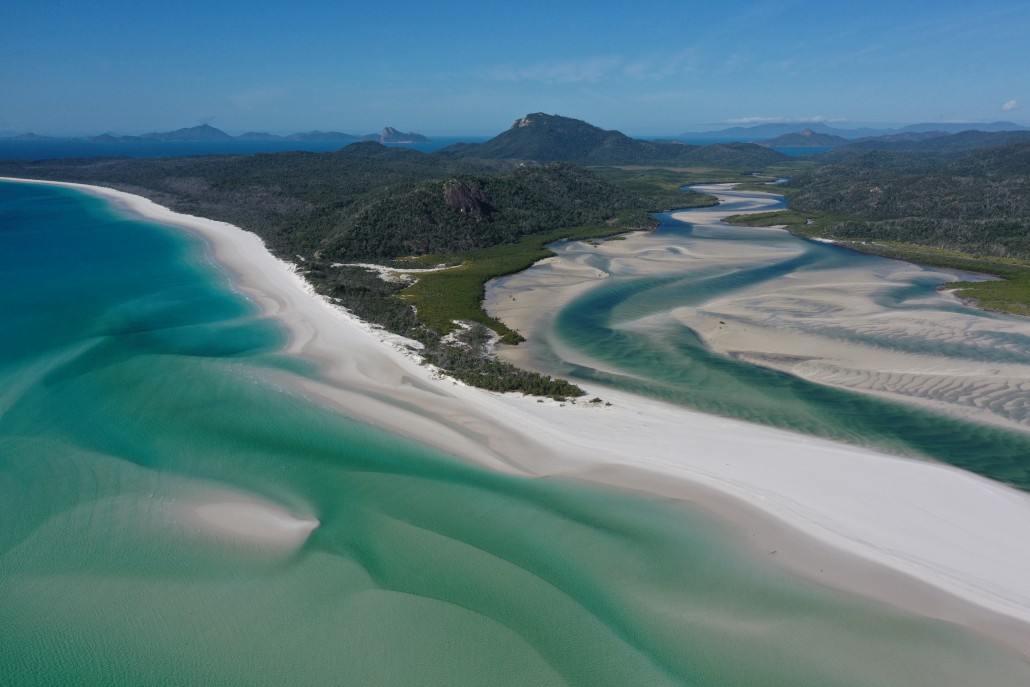 Accompanying Jacky and Rudi throughout the purchasing and commissioning process has been Martin Holmes, General Manager of Lee Marine Thailand. The dealership is celebrating 21 years as a Riviera representative, making it one of the longest-standing dealerships in the world.

Martin was a former Sunsail captain who arrived in Phuket from Europe and partnered with Josh Lee, a cruising sailor from the Gold Coast. There were no brokerages at that time as the Thai marine industry was in its infancy.

“Soon after that, we had an Australian expat who wanted us to find a motoryacht which was suitable for Asia. Josh travelled to Sydney International Boat Show and found a Riviera 39 Platinum,” Martin recalls.

“It was strongly built, had good fuel range, lots of refrigeration and offered ease of maintenance. He bought the vessel on behalf of the owner and shipped it back to Phuket, which is how we got to know Riviera.”

The following year, Lee Marine sold two new Riviera 48s, which were the flagship of the line at the time.

“In our experience, after 21 years, they’re still the highest quality motor yacht you can buy, and we always get great support from the factory,” Martin adds. “And in return, we said from the start, ‘once we put the Riviera sticker on the window, we’ll never take it off’.”

Lee Marine has introduced many first-time enthusiasts to boating in their region and engendered incredible customer loyalty. On the brokerage side in Phuket, there’s nothing like a pre-loved Riviera – boats sell almost immediately, regardless of age.

“We call Phuket the Monaco of Asia because lots of people from major centres around Asia keep boats there,” Martin says. “We have fantastic cruising waters with hundreds of islands, and people can go boating 12 months of the year. The quality of Riviera motoryachts speaks for itself in this region.” 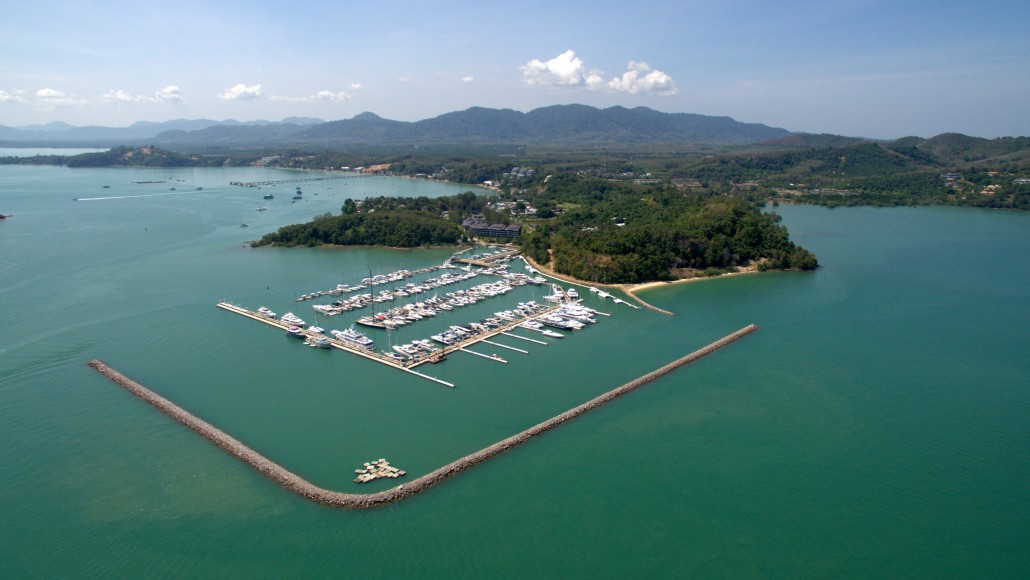