The 2016 Thailand Yacht Show and Yacht Forum were hailed a success for exhibitors and participants, positioning Thailand as a vital and enticing cruising destination. 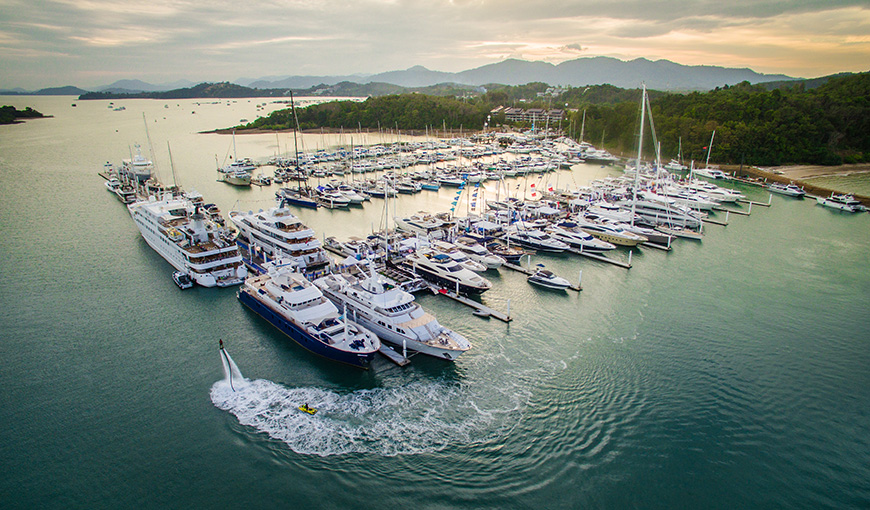 Held in partnership with the Thai government, the event was held under the patronage of the Minister of Tourism and Sport Kobkarn Wattanavrangkul, the Chairman of the Tourism Authority of Thailand Kalin Sarasin, and the Deputy Prime Minister General Thanasak Patimaprakorn.

With 60 exhibitors, and 55 vessels on display including 18 superyachts, the second edition of the Thailand Yacht Show was a good sign of things to come, according to organisers and exhibitors.

At the Opening Ceremony, managing director Andy Treadwell addressed the crowds with a clear mission: “Our aim is to position Thailand as the natural destination capital for yachting in Asia, as well as the preferred winter destination for the global superyacht fleet.”

He went on to explain that attracting charter superyachts and stimulating boating and yachting in Thailand would have a major economic impact on the country’s economy by bringing in the highest-spending tourism sector in the world, as well as creating jobs, global high-end PR, and stimulating inward investment.

Media attention was intense at this year’s TYS.

In addition to the impressive displays of yachts and superyachts presented along the pontoons of Ao Po Grand Marina, the Demo Platform by Java Yachting offered live demonstrations of dinghy sailing, SUP, dragon boating and kayaking. Luxury lifestyle brands were also on land at the Exhibition Pavilion, to feature the very finest in Phuket property, fashion, cars and nautical accessories.

The social scene at TYS was just as vibrant – from the Opening Party at d’Deck sponsored by Sevenstar Yacht Transport to the closing extravaganza on board the appropriately-named Hype. Titan Brokers threw an extravagant party on board the 90-metre Lauren L. There was much celebration on board the iconic, 41-metre Ocean Emerald.

Throughout the four days, the pop-up bars and hospitality suites along the pontoons fed the festive atmosphere.

“Thailand needs more visibility around the world,” said Ron Patston, CEO of Gulf Charters, based at Jomtein Beach on the Gulf of Thailand. “The Thailand Yacht Show and the Thailand Yachting Forum are doing a good job of spreading the word. Not just about Phuket – the islands around Koh Chang are some of the best cruising grounds in the world, and we are here to help make more noise about it.

“Thailand Yacht Show is the place to see and be seen in Thailand. It provides a good boost for the marine leisure industry in this part of the world.”

Luxury goods and prestige sports cars were among the displays.

“As the marine leisure industry grows in Thailand, so will the demand for infrastructure,” said Matthew Na Nagara, General Manager of Port Takola Marina, scheduled to open in early 2017. “We are here to spread the news, to raise our visibility.”

Luxberths, a brand new captain-to-marina online berth booking system, timed their launch to coincide with the Thailand Yacht Show. “This is where the boats are,” said James Wickens, Managing Director. “So this is where we need to be as we launch this new global product.”

Scheduled to book-end industry activity in the region, the combination of the Thailand Yachting Forum and the Thailand Yacht Show proved to be a solid complementary mix. The Yachting forum was an opportunity for the industry to hear updates from representatives of various Thai government departments about the realignment of regulations, with a particular emphasis on the licensing of superyacht charter and crew immigration issues. It was also the occasion to filled in on the present state of boating in the Andaman Sea and the Gulf of Thailand, and the status of marina infrastructure in Kingdom.

For the leisure marine industry in Thailand, this information was very important. It gave the delegates at the Forum a proper window on the current state of governmental regulations. It also allowed key players to be advised of the statements of intent of the relevant government departments – principally Marine, Immigration, and Revenue.

Australia’s Trenton Gay, CEO of Gold Coast City Marina and Shipyard provided a supportive final word on behalf of the Australian yachting industry. “In Australia we are right behind what you’re doing in Thailand, because we know that once the big boats start coming here, they will also carry on down to Australia and New Zealand. Downunder, we too have hundreds of miles of beautiful cruising grounds, and we also have phenomenal first class refit and repair facilities.”

Mr Gay had a very important message for the Thailand Marine Business Association: “Getting government involved in the development of boating is crucial. Getting government to move as quickly as the industry would like might not be quite so easy, but we have to understand that it’s impossible for any government to make significant changes overnight. But keep at it: you are going the right way.”