For Jacky and Rudi Dijk, who recently returned to their homeport of Phuket, Thailand, after cruising the Mergui Archipelago on a ten-day trip, the cerulean waters and white-sand beaches provided the perfect backdrop for a week of exploration, swimming, and entertaining friends aboard their deluxe 68 Sports Motor Yacht Fatboy.

In the Andaman Sea off southern Myanmar lie more than 800 islands barely populated by Moken, an ethnic group of sea gypsies. Officially named the Myeik Archipelago, but better known by its colonial name, the Mergui Archipelago covers 36,000 square kilometers in a narrow north-south axis. Only opened to tourists in 1997, it is one of the region’s final frontiers. “It’s like Thailand was 50 years ago,” says Martin Holmes, Riviera’s Phuket representative. 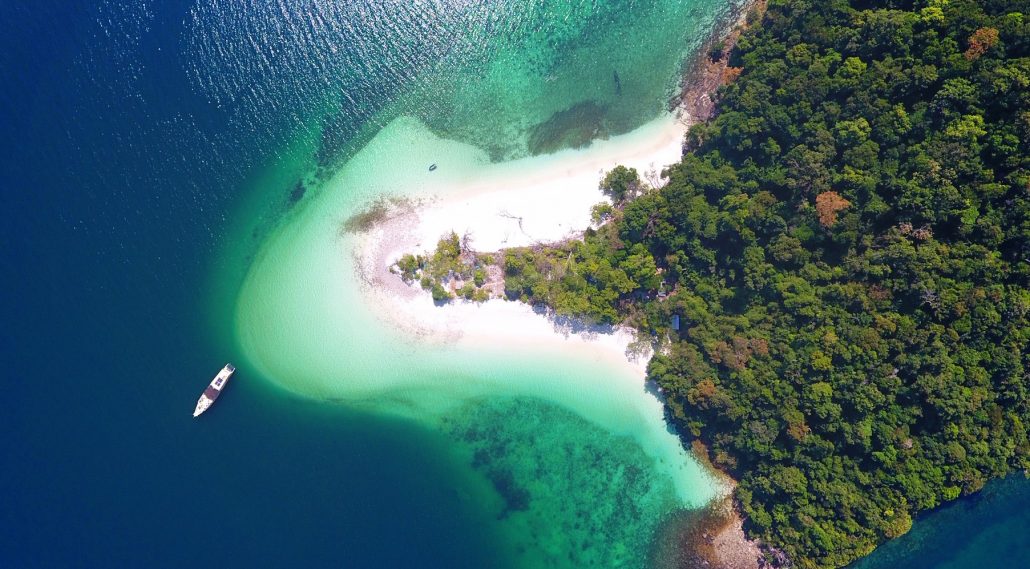 And that’s why, luckily before the latest crisis in Myanmar and the pandemic, Martin jumped at the chance to put his experience as an offshore yachtsman to the test aboard the Dijks’ sparkling 68 Sports. Their second Riviera, the Dutch couple acquired Fatboy for her luxury and offshore capabilities – and with the express intention of traveling beyond Phuket waters incomplete, carefree comfort. “When we decided on the Riviera, we decided to make two to three adventures every year,” says Jacky.

Myanmar was a no-brainer. They left Phuket at the start of February for a ten-night cruise with four friends and three crew comprising Captain Kay – the Dijks’ Thai captain – a Myanmar guide and Martin. “It started as a joke,” remembers Jacky. “I asked Martin if he thought I should take a deckhand, and he said, ‘I’ll be your deckhand!’” 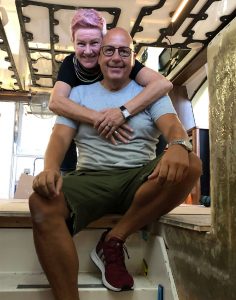 Jokes aside, Jacky and Rudi welcomed Martin’s support as the archipelago has no mobile phone coverage, no emergency services, and – as it belongs to Myanmar – is under military control in restricted waters.

Martin says Mergui’s isolation made it a real adventure. Certain permits first need to be acquired and an itinerary pre-approved.

“Taking a Myanmar guide is mandatory and very helpful,” he notes. “The archipelago is huge and last surveyed in the 1930s, so there are uncharted rocks and bommies. Having local knowledge and someone to assist with translations was important.”

After reaching the Myanmar border 185 nautical miles from Phuket, they weaved between the islands for a week’s exploration. The Dijks take great pleasure in entertaining their good friends in spectacular scenery, Above: Tourist access to the 800-odd islands of the Myanmar-owned Mergui Archipelago only opened up 25 years ago, and the region remains barely inhabited, thoroughly remote and utterly stunning. Opposite: Serial Riviera owners Jacky and Rudi Dijk took their 68 Sport Yacht Fatboy on a cruise up the Mergui Archipelago from their home waters of Phuket and there were even a couple of nights sleeping on the foredeck counting shooting stars. “It’s always hot and humid, but on Fatboy, it’s not always necessary to have the air-conditioning on. We can open everything up, and the design of the boat is perfect for airflow,” notes Rudi.

“It’s also why we wanted an enclosed flybridge, especially for extended cruising. Otherwise, you get grilled, or it’s too wet. She’s a very luxurious vessel,” adds Jacky. “We glide along on the water in luxury and there’s space for everyone. There are so many different areas to hang out, even when we have bigger groups of people on board.”

It’s why the couple opted for the Classic layout that offers three ensuite guest cabins. “But one of the things we love most,” says Rudi, “is the position of the aft galley, right in the heart of the saloon and mezzanine. 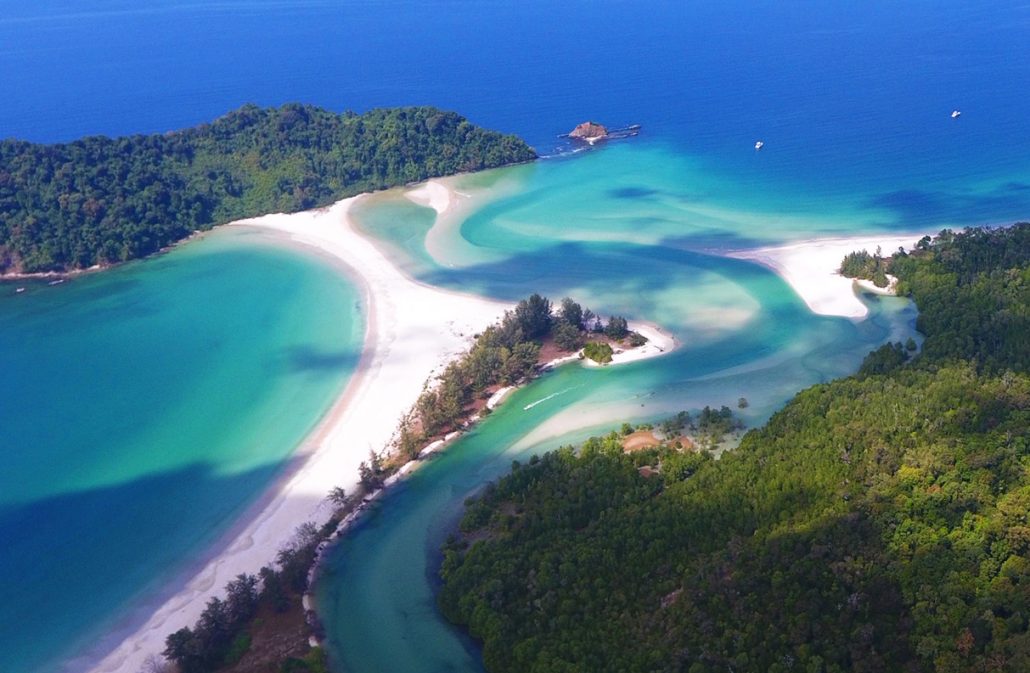 “It makes cooking a very social activity, and the large awning window is one of the nicest things; it’s a very social boat.” Provisioning for ten days was a breeze, with plenty of storage space on the 68. With longer trips in mind, the couple converted the cockpit fridge into a freezer, although fresh fish came cheap: “We exchanged $2 bottles of rum and $5 cartons of beer for fish from the locals. It was fantastic!” says Martin. While Jacky had taken their fishing gear, in the end he says they simply weren’t in the mood for it. “We were socializing, swimming and exploring new places. “One of the reasons we upgraded from the 5400 to the 68 is the bigger tender – in this part of the world there are no marinas, so you rely on your tender.”

For two days straight while they island-hopped, they didn’t see anyone else. The Mergui Archipelago is made up of rocky limestone karsts, little pinnacles, and granite rock islands. It’s arctic blue at the water’s edge with impeccable white beaches. “Every anchorage was a dream; each one better than the last,” says Martin. 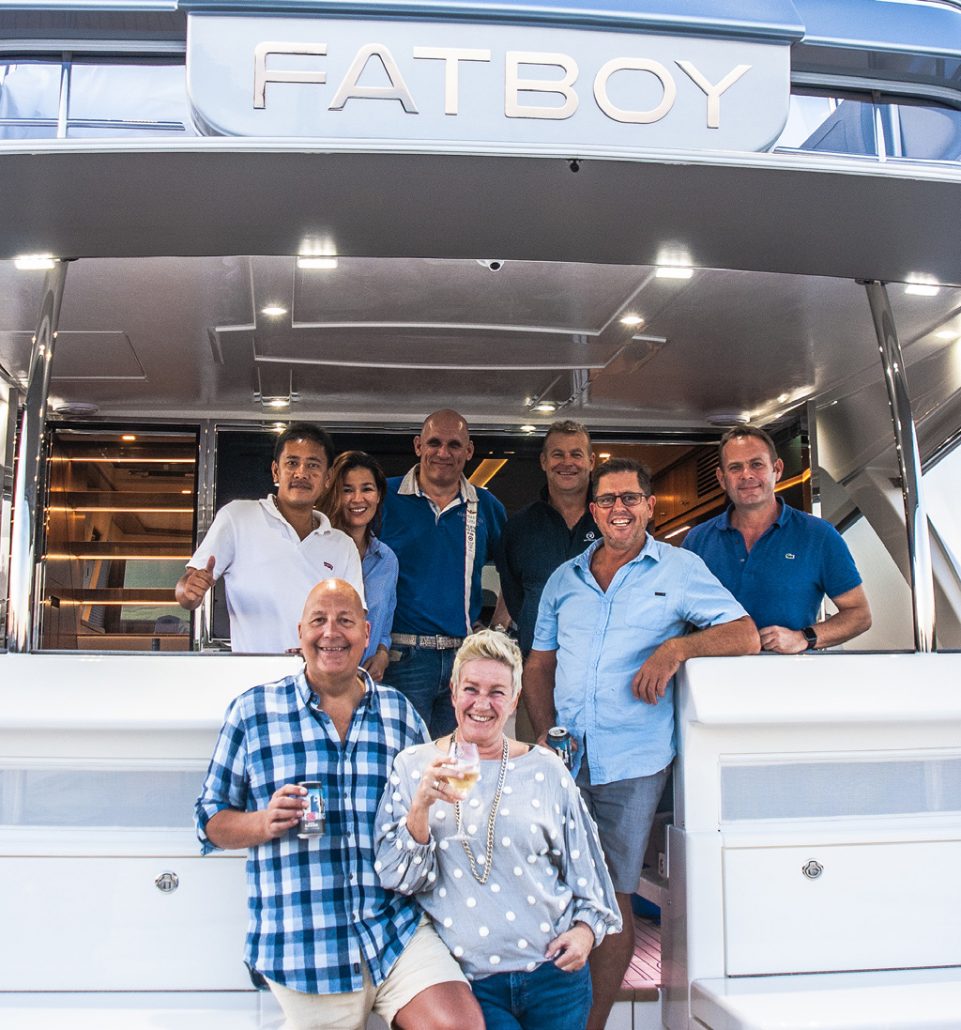 While the crew took care of most of the logistics, Jacky says he appreciated being able to keep his finger on the pulse, especially the navigation and weather. “You can monitor everything from every corner of the boat on your iPad,” he says. “And by connecting the nav charts to the big television in the saloon, our guests could always see where we were.”

After their experience in the Mergui, Jacky says he’s sure Fatboy’s offshore capability will continue to be put to good use. “We took the option of long-range diesel tanks to be able to take on extended trips,” he explains. “Through the Mergui, we were using around 13.5 liters per nautical mile, which is very reasonable for a boat like this.”

So why did the Dijks choose to upgrade to the new 78 Motor Yacht, their third Riviera in four years? As Jacky explains, “We’d just taken delivery of the 68 in 2019 when Riviera approached us and asked for feedback on the preliminary design of the brand-new 78. The only area we thought Riviera could improve was the interior design, but we noticed they really listened to us and then saw a lot of our feedback incorporated into the new design.”

“There was also the option to customize the interior, and the technical standard improved again, so it has the latest technology. On top of that, Wes Moxey told us hull #2 had our name on it. What can you do?”

Clearly, it was a done deal. Already named Big Mama, Jacky says the 78 is built with everything you need as standard, so there were few extras to choose from.

“We opted for the slightly bigger engines, plus we’re discussing some changes in the AV system and adding a server to stream movies and music,” he says. “We plan on keeping the tender permanent on the swim platform, and don’t need the crane on the foredeck – we use the foredeck a lot while underway, as it’s far from the engines, and you can catch a breeze with the best view.” 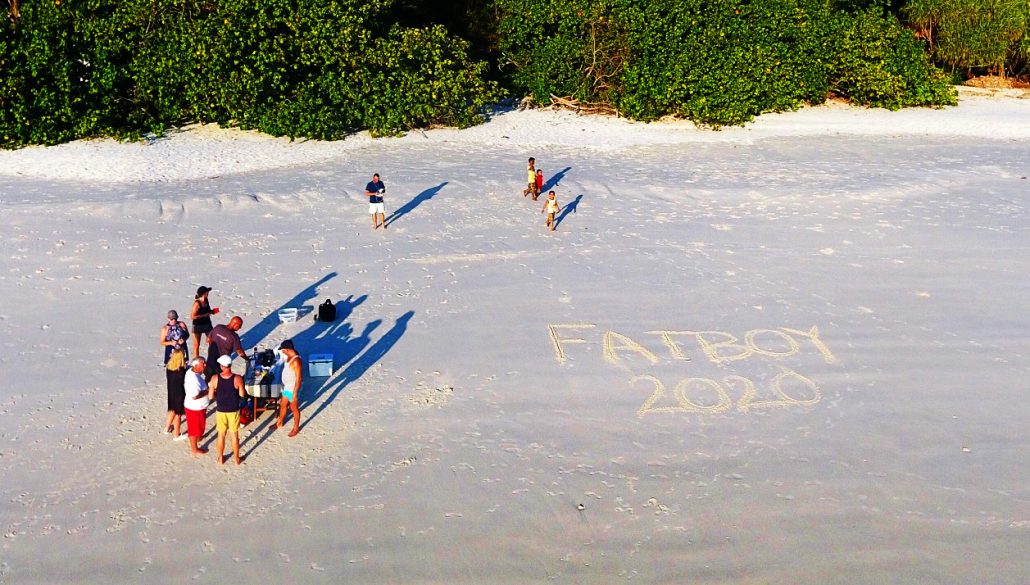 Confirming the level of customization they’ve become accustomed to with Riviera, Jacky notes: “We designed a big sofa bed/ sunlounger on the flybridge, and we changed the starboard cabin into an office/workspace with, if necessary, a fold-out Pullman bed.

“We don’t have kids, and finding three couples on board is perfect, so we don’t need the extra cabin. It’s all perfectly designed by the Riviera team in cooperation with Lee Marine, the Riviera dealer in Thailand.” 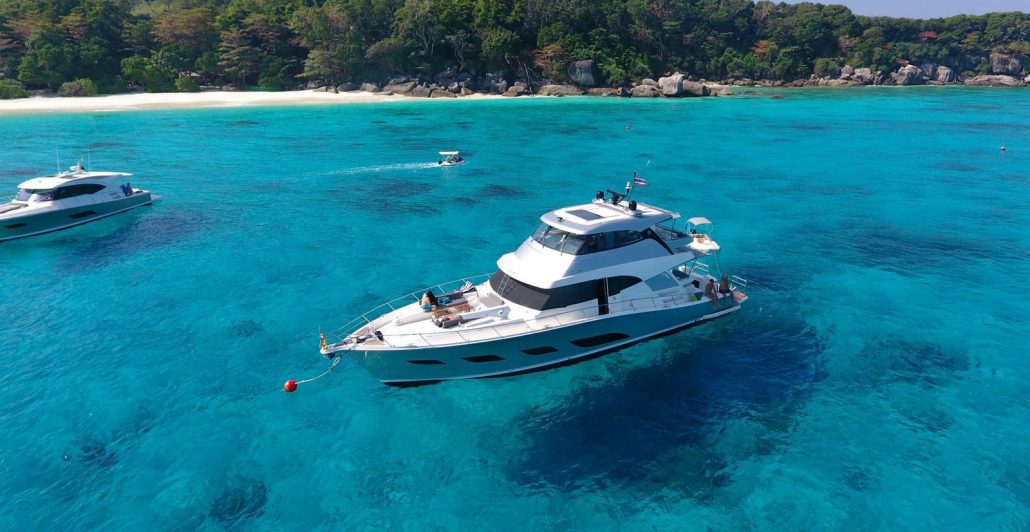 It sounds like all that’s left to organize is their next offshore adventure. Jacky and Rudi have that covered, too, with a trip to the Andaman Islands in the works. “If you have a yacht-like the Riviera 78, it’s nice to challenge yourself and do special things like this,” explains Jacky. “Gathering information and talking to other boaters is great. The aim would be to find a few more boats and see how far we’ve come. If you don’t dream and try, it will never happen!”

Ever exploring, it’s a perfect pairing between the Dijks and Riviera, and an ever-evolving story. As Jacky and Rudi say, “Watch this space!”